Los Angeles, California - Since 1986 the Friends of the Los Angeles River has helped protect and restore the river’s historic heritage and riparian habitat. And now that the UCLA Library has acquired FoLAR’s complete administrative records, the story of the organization’s role in the river’s rebirth can be found here.

“I am delighted that FoLAR has chosen to give its records to the UCLA Library,” said Ginny Steel, UCLA university librarian. “The organization’s remarkable advocacy on behalf of the river, which offers both precious public space as well as a valuable environmental resource, has transformed it into a location for recreation as well as learning. Its records will be of interest to current and future generations of students, scholars and environmentalists.”

In response to a series of devastating floods, the Army Corps of Engineers turned the most of the river’s length into a concrete-lined flood control channel beginning in the 1930s.

Among FoLAR’s programs to connect people to the river are “La Gran Limpieza,” an annual river clean-up held each spring, and an ongoing series of conferences and planning workshops. Its accomplishments include the transformation of two former railroad yards into state parks and the development of a bike path that continues to connect the neighborhoods along the 51-mile stretch of the river.

The records given to UCLA Library document the efforts to monitor and improve the river’s water quality, create educational programs, promote sustainable water usage and develop bikeways and pedestrian paths, among other activities. 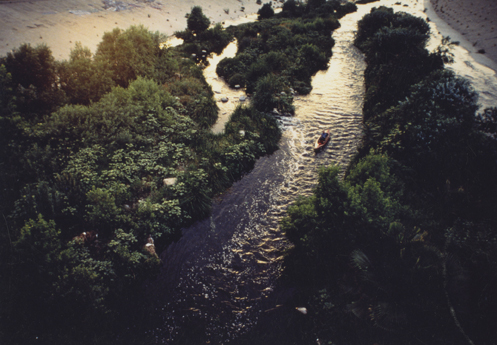 Contents include rare photos of the one-off performance piece at the original Wallenboyd Theater — a performance that gave birth to FoLAR as an organization; the files of FoLAR’s Los Angeles County Drainage Area lawsuit that forced the Los Angeles County Department of Public Works to create the first L.A. River masterplan; and the records of FoLAR and its allies’ successful battle to turn a shuttered railyard between Chinatown and the L.A. River into a state park, which some have called the largest multi-ethnic, multi-cultural, multi-class coalition in the history of the city.

Those materials, as well as more than a hundred boxes of additional files, newsletters, photographs and reports documenting FoLAR’s efforts to promote environmental awareness and community engagement, will be housed in UCLA Library Special Collections.

“I’m honored and touched to know that FoLAR's story and the story of the re-birth of the Los Angeles River will be part of the UCLA Library’s collections,” said Lewis MacAdams, president and co-founder of the group, who has described FoLAR as “speaking for the river.” “This archive will tell tales of wild plans and bold gambles, of public comments and poetry readings. It provides incontrovertible evidence that a dream can change a landscape and a living blueprint of the original vision that the Los Angeles River could become a greenway from the mountains to the sea.”